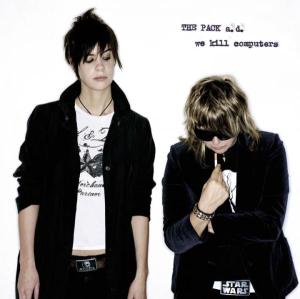 In 2009, The Pack A.D. played over 150 live shows. When Becky Black and Maya Miller came to the end of this epic road trip, two things were clear in their minds: 1) computer-worshiping humans don’t hold a candle to the awesomeness of wild beasts, and 2) It was time to stop singing the blues. The pair high-tailed it to their HQ (a tiny, unheated band space smack in the middle of Vancouver’s notoriously gritty downtown east side) and got to work. As with most things in The Pack A.D. universe, the process was organic: within two weeks, Maya and Becky emerged with we kill computers (Mint Records), a ragged, thundering wallop of an album that makes their earlier releases sound tame by compaison.

With Jesse Gander (Japandroids, Bison, etc.) who’d been on hand during the Funeral Mixtape sessions and recorded the duo’s razor-edged garage rock straight off the floor to analog tape. They turned to engineer Jim Diamond, the man who helped finesse the piss’n’vinegar sounds of the Detroit Cobras and the Dirtbombs, and the result is we kill computers which is as raw and unrgent as a Pack A.D. performance.

The CD opens with “Deer”, a hard guitar and drums tune that hits you right in the face. Written about wild deer on their road trip/tour of 2009, the melody is organic in its intensity and questions nature versus technology. “Everyone Looks Like Everyone” is reminiscent musically of a Jack White tune but it’s the lyrics that draw you into the song. Animals all look the same – be it human or beast. “Crazy” has a good melody and it flows full force onto the listener. The chorus is catchy and I like the vibe of the song in general. Again speaking of nature and the vastness of forests full of animals it’s a primal song at it’s core. “1880” is an interesting song with it’s stutter/stop/go sound. I really like how Maya plays the drums in this song and Becky’s guitar compliments the drums to a tee. This song could almost be a headbanging metal song if it was in four-time. The punch line is the ending of the song as it changes time completely and sounds totally different than the beginning. Other songs that stand out on this new collection of songs are “Cobra Matte”, a song that is fast, short and Becky’s vocals are spot on for the speed of the song; “B.C. Is On Fire” is a song that has a classic rock sound and was written about the forest fires of 2009; “They Know Me” is a slower song which Becky sings beautifully in a soft voice; and “The Slow Down” which is this writer’s favorite. I really like the slide guitar that Becky plays which compliments her voice as well as the drums. Maya is laid back on the drums and plays well as the song builds to a heavy-ish conclusion.

The 13 songs on this CD are very well mixed and mastered and present a different sound and partial departure from the previous songs The Pack A.D. have done. All in all, this CD is packed with high energy, catchy riffs, hard rocking drums and smart lyrics about how humans view nature as being humanized. On a scale of 10, this CD rates in at 8.

You can find out what you need to know about The Pack A.D. at the following links:

The girls are on a mini-mid-tour-break at the moment, but they start the second leg of the tour with a CD release party this Friday April 23 @ The Biltmore in Vancouver with guests The Angry Dragons from Manitoba and Vancouver band Sex With Strangers. Doors @ 8pm and tickets are $13.00 plus service fees.

I left work shortly after 8pm to go to Gastown in the Downtown Eastside of Vancouver. The night was pleasant and after having a meal, I went to the Lamplighter Lounge for a live show. I arrived shortly after 9pm, and the first band was on. This venue has recently been renovated, and it is has a great vibe. The sound was pretty good no matter where you were. I wasn’t too sure which band was playing but they were very good. I found later that the band was Lengthy List of Lovers. Great melodies! Shortly after that, Accost were on. This was a band with some teeth. Good vocal work by Chantelle on pretty much every song with synths behind guitars to make a repetitive bass-like sound. Solid showmanship, crowd interaction and total enthusiasm was what this band was about.

Shortly before Sex With Strangers were to be on, I went to the front of the stage as I wanted to get some really good shots of the band in action. The show was high energy from the first chords to the last dance. A standout for this writer was the great rhythm work by the mysterious Magnus Magnum who hid behind Isabel because of the stage setup with drummer Dallas Archangel. They both laid the road open for frontman Hatch Benedict to act totally unpredictable as he danced with his band onstage and came out to join the masses on the floor. I was really surprised at how well behaved the crowd was in giving space to a photographer at the front. Amazing. Wedge Beavers on guitar was quietly playing himself into a subtle frenzy towards the end of the set, but not before the band had performed “New City Anthem” and as they closed the show out, members of the audience, myself included, got up and danced away the final notes of the gig. With high five’s all around, I would like to give kudos to the band for such a high energy, tripped out and up time at a show.

I would last like to thank Mark, cheers!, and the door staff at the Lamplighter. You guys should get a raise! You can find all the bands mentioned here in this article at the following links: