After 6 years of playing in a damp basement, writing and then forgetting song after song, Kyle Baker (Vocalist/Guitar) and Tyler Lawson (Guitar) finally decided enough was enough.

They asked long time friend and ex-drummer of the band Nimfo, Matt Waszonek, to take part in a new music project to allow his interlligent and flowing drum beats to be heard outside of the garage.  After working with over half a dozen drummers in the last 6 years, it was a relief to find someone with the talent, dedication and cohesiveness to flow with Kyle and Tyler.

The fourth and final member was a testament to the saying “last but not least”, as bass player Dave Rodgers joined the gang and immediately put his unique spin on the music.

With the four members finally together, the easy part was over.  Now for the music……. 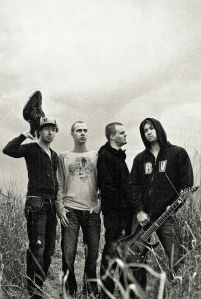 I had a chance to send some questions to the band to find out some general things as well as ask about their opinions on different subjects.

First off, I wanted to know what was the reasoning behind Kyle and Tyler forming a band and taking it to the next level. They both replied that “there were a lot of really awesome underground bands that we listened to such as Choke, Belvedere and Propahandhi that really rocked our worlds. These bands evoked such powerful emotions that I think we always wanted to have the same effect on people that those bands had on us. We also want to expand the Punk genre of fast, aggressive music to people who normally might not give it a chance.”

This band has that raw and powerful emotion that resonates within the group and shows in their music. I wanted to know what inspires the lyrics to the songs and was it a personal statement or was it something imagined. Kyle answered this question by saying that “the lyrics for the song ‘Know This Tension’ came out as an aggravated, sarcastic view of the things going on in my life that either pissed me off or was troubling me. I try and say things in a way that leaves room for interpretation so anyone can listen to them and find something that relates to their own experiences. This allows me to get things off my chest and really say what’s on my mind, while avoiding a certain vulnerability.”

Getting more into how a young and intelligent band sees the “music industry”, I asked them what their opinions are on the current state of the industry as a whole. They replied that “music has become more accessible over the years and we think it’s great. Not only for the musicians and/or artists who want to promote themselves, but for the listeners as well. Music is so easily accessible through multiple mediums on the internet and this allows for more variety and progression with each genre of music. With a positive side, there’s also a negative side which is how the music scene becomes more diluted which makes it more difficult for listeners to find what they are looking for. With so many bands out there promoting themselves, it’s difficult for the great ones to be noticed.”

With many talented bands out there, how does the lack of media coverage on independent bands and the scene in general affect Greyawake? They replied that “in this genre of music there just isn’t a lot of mainstream coverage, and we knew that beforehand. A lot of bands that we grew up on became shitty as they got more mainstream attention. There are ways to get your foot in the door at the mainstream outlets. They won’t come to you unless you’re a band that is making some big waves in the scene which basically means you have to be making money.”

Coming from Cambridge ON., I wanted to know how the guys felt about the lack of venues in which to play unknown and unheard songs. Cambridge is a smaller city to other more urban areas such as Kitchener and Guelph, and it was no surprise that they responded “in Cambridge there are very few venues that play original music by local talent. We are forced to go to surrounding cities to get any paying gigs. Bar owners also want to ensure that you can bring in enough people to make it worth putting on the show. What this means is that we end up playing a lot of shows with no specific genre and we end up playing for a metal crowd one night and a pop rock crowd the next. And that in turn forces bands in general to not only have a tight set but to also be exceptional performers so that even if the genre isn’t the crowd’s first choice you’re at least entertaining to watch.” I think that they hit on a good point here. In this day and age, not only should you have good tunes but you need to have a “show”. Individual talent within the band is becoming commonplace. Greyawake also add that “these days bands really need to network with other bands that are in the same genre and put together shows themselves. And by doing that you reach more of the listeners that want to hear your music.” This is another good point – self promotion is done by musicians that don’t have a label to do that for them.

When I asked the band about how they would describe their music to someone who has never heard the songs, they answered “we consider ourselves a Progressive Punk band. There is a strong focus on the vocal melodies as well as the technicality of our instrumentation and arrangements.” I also asked the guys about what kind of statement that they’re trying to make, and is there a message of any kind. They find that “Punk music doesn’t have to sound shitty. Musically, we want to melt people’s faces with our chops. There seems to be a stigma about Punk musicians who can’t play their instruments and in many cases this is true. We would really like to change this perception.” With that being said, I believe that they accomplish this goal extremely well.

Finally I asked what were the goals of the band over the next 2 years and where did they see themselves. They replied that “we are really focused on playing shows and promoting our EP but in the future we would like to tour extensively GLOBALLY. We also want to finish writing and recording our first full length album by the end of 2010. We’re all just very excited to play everywhere and anywhere that will have us. We’re ready to put in the work to get our music out there.” They also added that they were in discussion about getting their own line of action figures. That could be an excellent idea, Punk action figures, complete with moving arms and guitars that work!

All in all, Greyawake present a powerful, intelligent and progressive Punk band in their debut EP called KNOW THIS TENSION. 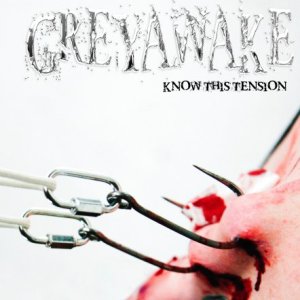 Greyawake are a progressive Punk band from Cambridge ON. Their first EP, Know This Tension , is crafted by individual talents joining forces to create a dynamic 7 song debut. From the first song “Bebop and Rocksteady” to the last song “Handsome Stanley”, this is a solid outing for this quartet. Intricate melodies weave a fast, aggressive sound that is totally their own. Besides having a definite punk sound, I found that there are also some elements of jazz, particularly fusion jazz that is deeply layered in with punk. A good example of this is the song “Roughinit”. This song is well structured and has stellar guitar work by Kyle and Tyler along with steady rhythm lines with both the bass and drums. Another standout song for this writer is the song “Pissin’ In The Wind” which is a really funked out hard punk song. Fast, aggressive guitars with good vocal work by Kyle makes this a standout.

You can find the band on their MYSPACE page. The EP can be listened to on Myspace and if you want to get the EP, you can contact the band. Also, Greyawake have upcoming shows on Friday February 5 at The Circus Room in Kitchener ON., and on Sunday March 7 at Vinyl in Guelph ON. Both shows have a door time of 8pm.