Acres of Lions is a pop/rock/punk/alternative band based in Victoria, BC in Canada and features ex-touring members of the seminal American punk band Against Me! and also from Moneyshot and Theset. Their music is lyrically-driven rock, influenced by bands such as The Get Up Kids, Jimmy Eat World, The Weakerthans, Alkaline Trio, and Saves The Day. The band members are Jeff Kalenikoff, Tyson Yerex, Dan Ball and Shane Deyotte.

This band has been active since 2006 but in 2008, Acres of Lions signed a recording and development contract with Cordova Bay Records and received critical acclaim for their 2009 debut full-length album, Working.  Exclaim! Magazine reported “This is definitely a band to keep on the radar”. They then followed up that up with their sophomore album, Collections, also released on Cordova Bay Records in 2011.  This album took the band’s sound in a more pop-influenced direction, and was met with more commercial success. The first single, “Reaction”, was mixed by legendary engineer Mike Fraser (AC/DC, Mother Mother, Franz Ferdinand) and charted at #19 on the Canadian alternative rock charts.

2011 was also a big year for Acres Of Lions, as they were selected by Music BC as one of the ‘Top 20 Bands in BC’ for the Peak Performance Project. Other highlights included music placements on television programs Degrassi and Majority Rules, and a cross-Canada tour supporting JUNO nominated indie-rockers Ten Second Epic.

In 2012, the band attracted international attention, placing third in the pop category of the International Songwriting Competition and releasing their albums though Bullion Records in Japan, and Fierce Panda Records in Europe. They also took on an impressive 250 date touring schedule, including: two cross Canada tours, two tours to the UK, performances at Canadian Music Week and Edgefest, opening slots for Hedley, and more than 6 months on the road with a provincial government career building initiative performing for youth around British Columbia.

As of 2014, the band is currently in the studio writing new material for what will become their fourth full-length album.

I’m a big fan of Against Me! and when I heard that Acres of Lions were forming in Victoria BC in 2009, I began to following them because of their association with Against Me!.  But, over the last 5 years, they have proved to me and their fans that they are a band to be heard and have commercial success to prove it. 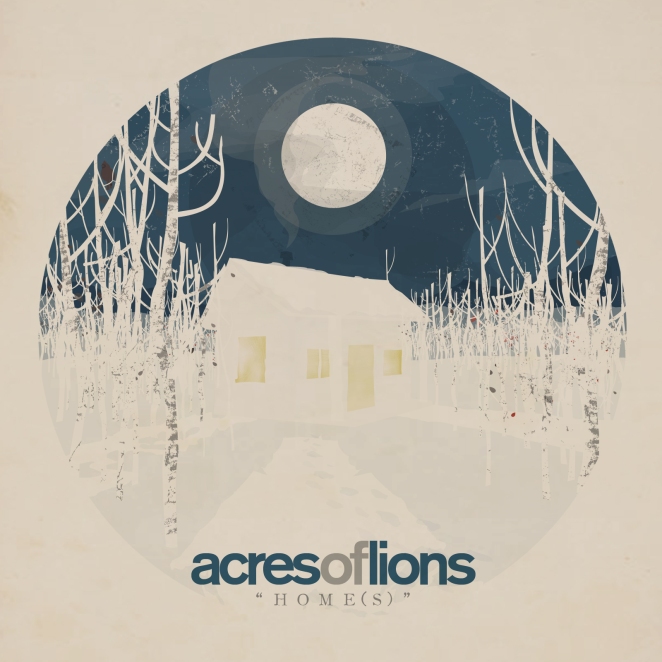 The track listing for the CD is as follows:

8.   Writing from the Heart

The song “Bright Lights” is a fast, up-tempo song with a good melody and played well by all members.  “You used to have solutions/And did I make your list just to never follow through/On any of them but you” gives me the impression that the song is about someone who likes another person who makes lists of certain things about people in some ways.  Also, the song is about past memories of cool kids and celebration drumming circles probably on the beach somewhere with a big bonfire going.  And love at first sight.  In some parts of the life, being cool and doing what’s cool at the time is what this song reminds me of.  It’s a good party song and a good dance tune.

“Prairie Fire” is a hip tune that sings about UFO’s, summer ghosts, fires, night time; all emulated in this song.  I really like the melody of the song as it’s catchy and has a good hook.  This song speaks of not having any where to go and searching for something that may or may not be tangible.  This song is well played by all members of the band.  The melody is upbeat and makes you feel good.

“Never Let Me Go” begins life full on and goes down to bare bones with the vocals.  “Say you won’t forget me/Say you’ll never let me go” could be about a touring band saying goodbye to loved ones for an extended period of time.  I like the stop/starts, the guitars and the vocals.  It’s a good song and well constructed.

“Signs and Wonders” is the last song on the album.  I like the lyrics of this song and the melody is choppy and chaotic but well streamlined.  “At the end of your life” is a great first line to open a song.  Sounds like someone is watching life go by in a detached kind of way.  I like the vision that brings to the song.

I wanted people to know about this band because they aren’t self absorbed and play for the love of music and feeding off the energy of crowds at shows.  Their passion for music is evident in their lyrics and in their live shows. There are many videos on their YouTube channel but I like this acoustic performance on The Peak radio show. Watch, listen and enjoy.