Jack White is an amazing artist.  From his humble roots growing up in suburban Detroit to forming some of the best bands in the 21st century including The White Stripes, The Raconteurs and The Dead Weather.  He’s a father, 2x ex-husband, singer/songwriter, producer, a player of many instruments, and an occasional actor (in 2003;  Mutant Swinger From Mars and in Cold Mountain).  He’s always declined to speak about his private life saying that “If you asked Michelangelo what kind of shoes do you wear, it’s not relevant to his art and thus is irrelevant”.  Jack feels that same way.  Married in 2005 and divorced in 2011 (to Karen Elson) he’s now debuting a secular and introspect to his musical taste. 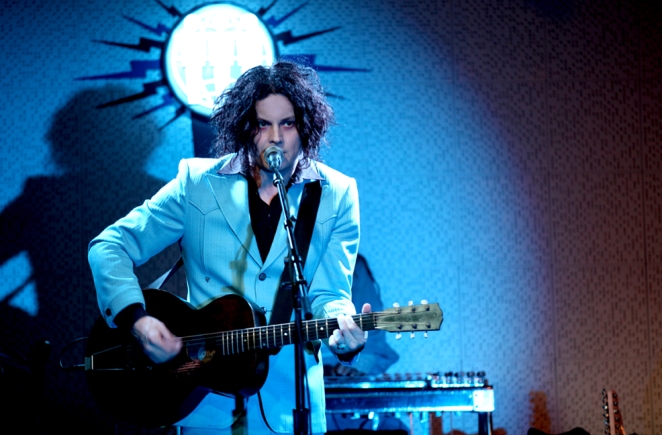 The White Stripes, The Raconteurs and The Dead Weather are some of the bands he’s put together in the 21st century,  but there are bands that have not been famous and in fact they pre-date The White Stripes.  Those bands are The Upholsters, Two Star Tabernacle, Goober and the Peas and The Hentchmen.

The track listing for the Blunderbuss CD are:

7.   Weep Themselves To Sleep

All of the songs on this debut CD are alive and crackling with high energy.  The first song, “Missing Pieces”, is a really well done piece of blues.  The Rhodes piano makes the song feel more like classic rock and it works the hard sound of the  guitars.  The whole song flows like sweet wine on a hot summer day.  “Sixteen Saltines” has a hard guitar line that is very catchy.  Energetic, good melodies and acerbic lyrics that sounds like a personal song in some ways.  When you have a  line that states “Who’s jealous of who?” you know its about something or someone.  “Freedom at 21” has jazzy drums with two guitar lines – one on the hard lower fret notes and the other with spaced out high fret notes.  The vocals are strained with a held back anger in the lyrics speaking , “And she don’t care what kind of wounds she’s inflicting on me”.  Yikes!  “Love Interruption” is a stripped down song with backing vocals by Ruby Amanfu – which is a dynamite call.  Both singers sing of love, corruption and changing friends to enemies.  The acoustic guitar work is done well in this song.  “Bunderbuss” is Jacks’ take on grass roots blues music.  Simple melodies sound beautiful with the standup bass (by Bryn Davies) and the Pedal Steel (by Fats Kaplin), soft vocals and acoustic guitars give the song a dreamy feel good feeling.  “Hypocritical Kiss” is a song that is about hurt, betrayal and lies.  Lying to impress people is just not a good idea – it can lead you so far but eventually you’ll be caught in a web of lies and no one is impressed by that.  Well played by all the musicians and good mixing makes me like this song a lot.  I can definitely  relate well to the lyrics in this song. “Weep Themselves To Sleep” has a good musical opening which reminds me of saloons of the 1800’s.  It’s a choppy song musically especially during the bridges.  Some parts of the music is just a bit off key but it goes down well with lyrics.  My favorite lyric in this 12 song brilliant CD is “that the villain will play the victim/the tame can’t shake the reins of demonizing brains that mean to kill them”.  “I’m Shakin'” sounds like The Cramps songs used to in the 80’s.  It’s about love, being nervous, jumping, sweating  …. you know.  Karen Elson also does some backing vocals for this song.  “Trash Tongue Talker” has a neat opening with drums and piano.  In 4/4 time slow this song picks up speed for a superb ending and a good ol’ jamming.  Jack is on piano in this song and I can hear the fun flowing out his fingers hitting keys.  Again this song has fluidity that keeps you moving in some ways, whether you’re clapping or jiving its a song that is up at the top in this collection.  “Hip (Eponymous) Poor Boy” sounds like honky-tonk with piano tunes of old.  I like how Jack sings from a lower note and brings it up a notch towards a higher note at the end of verses.  The bridge of the song is upbeat and has a feel good song.  “I Guess I Should Go To Sleep” is short, sweet and has a bluegrass feel to it.  The melody is in fact rather complicated in its simplicity.  You could in fact sing this for kids to go to sleep.  “On and On and On” begins with the upright bass whose notes are more in the off key to give it a foreboding and personal feel.   I particularly like this song and how the piano is fed through a Leslie speaker, because it gives the song a whimsical feel and look back perhaps into Jacks’  life and how it has changed him over the last decade.  And the last song “Take Me With You When You Go” is definitely the best song for me on the CD because it’s actually 2 songs bridged together or if not, its brilliant because the song starts slow and then suddenly it’s kicked into high gear and then just ends.

I don’t give out high marks in giving a review but this is a solid body of work that stands up and exceeds the bands that Jack has involved himself in.  On a scale of ten this record is 11.  Superb songwriting skills and the knowledge to paint a story in your head for a brief moment in time.  And if you like the music Jack creates with other people you’ll be blown away by this gem of work.

Jack White Unstaged (directed by Actor Gary Oldman) is on Jacks’ YouTube/Vevo channels which are being  broadcast at 9pm EST/6 pm PST.  You can then hear Jack perform his new work by clicking on the link above.  I will be watching this broadcast and hopefully you will too.