Rioting Reverb is a band from Mississauga ON that have a quirky, folksy and somewhat rock sound to their music.  They are a relatively new band on the scene.  I dig their music.  The band members are:  Mike Batruch – Guitar/Vocals/Harmonica; Devon Golding – Bass/Back up Vocals and Joseph Boyland – Drums/Percussion.

I asked Mike Batruch about the band and this is what he had to say:

“This current line of Rioting Reverb has been around for about 4-5 months now, with Devon joining in August 2013.  Our previous bass player was unable to continue with us. It started off as a singer songwriter project by myself (Mike) in November of 2009, and in January 2012, Joe joined me.  We went through several bass players before Devon joined. We independently released our Debut EP ‘High, I’m Your Neighbour’ in April 2013.  It was recorded and mixed by Devon at a friend’s basement.  We are currently playing shows and we’re working on a stop motion music video for our single ‘This Wasn’t It’.” 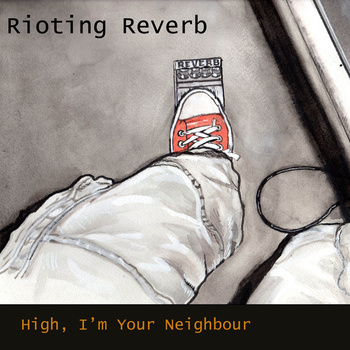 I am currently streaming their 4 song EP from their SOUNDCLOUD and the songs are:

“This Wasn’t It” is a dance-able folk song (think the pogo) with some light punk ethic for good measure (standard 3 bar beat).  Mike’s vocals sound inviting, warm and slightly out of tune which makes it a good live off the floor recording.  The melody is not too fast but laid back and is played well by all members.  I like the roughness of the song and its straight-forward message of if things don’t work out like you thought, find a way to do what you love and don’t let anything stop you.  Forge ahead because your time will come.

“Respirator” is a song that reminds me lyrically of playing hide and seek or spin the bottle.  Both go back to a time of innocence when your a child and a teenager.  This song also ranges in its’ emotional side of life “one day I’ll be smiling/the next day I’m sad”.  It also highlights the folksy, harder edged and well played guitars of Mike Batruch.  The bass is low and the drums pound away.  This is my favourite song. 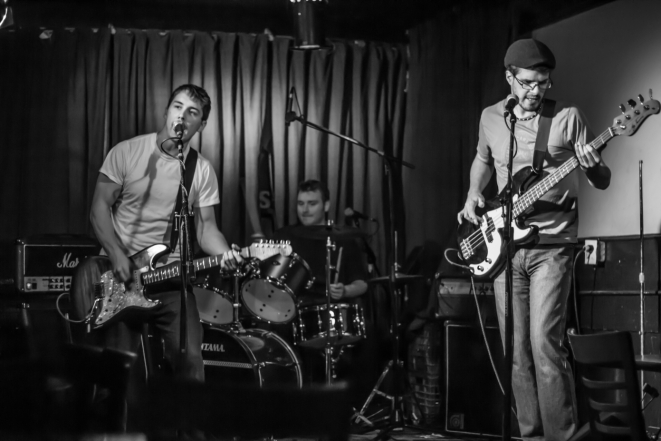 “Old Stories!” starts out with a harmonica opening by Mike (and is throughout the song) with the steady beat of the drums.  There’s also some time signature changes within the beginning of the song as well.  I particularly like the start and stop musical breaks within the song.  A song about stories told to us about morals, life and watching what you wish for.  A very good song.

“Untitled Jam 1” is a mish-mash of music that is funky, bluesy and kind of folksy.  The first part is really heavy reverb on the guitars; very 70’s influenced.  It’s a good song to rock out to on the dance floor.  The song itself has an uneven sound but that’s its’ charm.  The second part starts out with looping that sounds straight out of the ’60’s and is presented well.  It does have structure and towards the middle, the guitars replace the loop and sound terrific – dreamy guitars on their own standing strong.

These 4 songs are a good start to this band, and I think we might be hearing more from them in the future.  The band’s music can also be found on BANDCAMP where you can also stream the music and buy it straight from the band if you really like it.  They are also on FACEBOOK and YOUTUBE for live video performances.