CD Review – The Electric Demons – Rip Your Heart Out 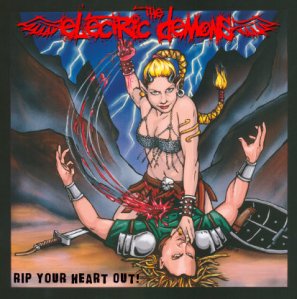 CD cover, courtesy of the band.

The Electric Demons – CD review – Rip Your Heart Out

This is the debut CD for The Electric Demons and sadly it is their last CD with lead singer Tarja Ridgewell. Tarja was in a horrible car accident 8 days ago and sadly passed away a few days ago. But her voice lives on with the music on Rip Your Heart Out. The band use monikor names, and they are as follows: Thundermonkey on vocals, Metal Murr on guitars, Sword on the bass and No Code on the drums.

The CD opens with the song “Over the Edge” which has high energy, good mixing and has great feeling to it. Not a long song, it has a one-two sucker punch with one guitar line to open and then the song hits you full on with heavy guitars, hard hitting drums and good vocal work which matches the music perfectly. The song’s melody is simple but effective in getting the song’s point across to the listener: living on the edge will eventually be your downfall. “Social Uproar” is a catchy tune filled with good guitar hooks. The bass and drums are locked well together in this song which gives the song a great backbone. The guitars are fuzzed out and crunchy as well as complimenting the vocal work by Tarja. I especially like the slow bridge in the middle of the song which is done well and timed perfectly. “Punk Out 1” is less than a minute long and is a pure headbanging song to craze out on. The vocals are so raw and primal that I want to stand up and do the pogo as I write this. “Queen of Rock and Roll” is a song that has a classic 80’s metal feel to it. At just over 5 minutes this is one of the standout songs on the CD. The melody of this song is catchy, the guitar hooks are all there and the bridge to chorus is really well done. The vocals fit the song perfectly. The bass line is really understated here but you can hear it under the drums and behind the guitars which give the song an understated sound. The other songs are mixed well but for this writer, the standout song is the alternative version of “Up In Smoke” which ends the CD. There are 2 versions on the CD of this song – one is heavy and full on but the other version is slower and acoustic, which brings out Tarja’s voice fully. Rough, raw and full of emotion the song is about having no money, one night stands, memory blackouts and looking for love and not finding it which makes you feel like a “lost soul” in the sea of humanity.

This CD is definitely a gem. And not just because of tragic circumstances of the accidental death of Tarja. The CD has original music and lyrics that speak of life, love and having fun which is how I view Tarja based on just the music. Celebrate the life of a wonderful person whose voice now sings from beyond to touch us all in individual ways.

The remaining members of the band The Electric Demons will be on hand this evening as they watch The Stoolies, Suck Up To God and headliners Little Guitar Army perform in memory of Tarja Ridgewell. All proceeds from the show are going to the Ridgewell family to help pay expenses for the funeral. There will be high emotions all through the evening as Tarja had many friends in the community of musicians here in the Vancouver area.

The show is at the Princeton Pub, 1901 Powell Street, which is located at the foot of Victoria/Commercial Drive. Please come and support the band and donate by buying the CD and raffle tickets. The Skinny Magazine is presenting this show in memory for Tarja. Showtime is 9pm.

Jade Sperry thanks you very much for any and all comments. JS Cancel reply